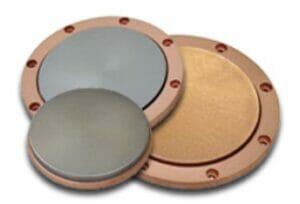 Sputtering targets are an often overlooked source of valuable metals, as many assume that following the sputtering process, the target is completely spent. However, it is not a 100 percent efficient process, so there is always some amount of valuable material left behind. And in many cases, this material is exceptionally rare and should be recycled when possible.

This is where scrap metal experts come in. For the vast majority of manufacturers, once the sputtering target can no longer facilitate production, it is of no worth. It can’t be used to make anything and removing the valuable metals from it is an arduous, expensive option. Scrap metal experts can get rid of those targets for product manufacturers, relieving companies of their metal waste burden, and ensuring that the metal does not end up in a landfill.

Any Sputtering Target Will Do

Often used in electrodes and other applications where electrical conductivity is essential, copper is an extremely valuable material for recycling purposes. It is not rare, but is used in many products and materials, including plumbing, wiring and even in windshield films.

Aluminum sputtering is often used in semiconductor applications, and aluminum, though not as valuable as copper, is still a sought after material for its versatility. Recycled aluminum is found in nearly every modern vehicle and airplane, and is also used in a number of household items. Aluminum is also prized for its inertness and heat resistance properties, which make it an ideal metal for containers.

Tin is a workhorse metal, in that it can be applied to most other materials to improve their properties. In sputtering, tin is used to improve corrosion resistance, and when recycled, it can offer corrosion resistance to other materials. It is typically used to coat iron, zinc, steel and lead in this way, and can also be alloyed with copper to produce pewter or bronze.

Zinc is another workhorse, and is often used as a sacrificial metal to protect other, more valuable materials. When sputtered onto another metal, it can act as a corrosion barrier and is often used in the production of cathodes. When recycled, zinc is used in a number of alloys, including zinc and bronze, and is found in batteries, propellant and paints.

These intrinsically valuable metals are occasionally used in sputtering applications, and provide a combination of electrical conductivity and chemical inertness, which makes them valuable for electrode and instrument production. They are worth recycling for their economic worth alone, but also provide usefulness in medical instrument production and as materials used in electrical wiring.

Beyond these fairly common metals, there are several alloy targets that contain some of the rarest materials on Earth. Some of these rare materials include:

Though not technically a rare Earth metal, it is still extremely uncommon, and the most valuable of all transition metals. In fact, the demand for tungsten has increased dramatically in recent years, mostly because of its impressive robustness. Tungsten has the highest melting point among all elements, at about 6,200 degrees Fahrenheit. It is also extremely dense and hard, and is unique in that it is the heaviest element that found in some organic life.

However, it is almost only found in chemical compounds in nature, making it tough to isolate and accrue in significant amounts. To an extent, this is what makes it so valuable, though it is important in several applications, including lighting filaments, X-ray tubes, projectiles, radiation shielding materials and in electrodes.

Gallium is a peculiar metal in that it is almost the opposite of tungsten. It is also very rare, and is only found in nature as a trace element in other chemical compounds. Typically, gallium is a secondary product of zinc mining, as it is most often found in zinc ores. However, unlike tungsten, which is tough, gallium melts in the palm of a person’s hand, and is a liquid at just above room temperature.

This unusually low melting point makes it a natural choice for temperature referencing, and is found in a number of applications, including LED lighting, lasers, pharmaceuticals and circuitry. Gallium is also an essential component of semiconductors, where it is used as a doping agent. This makes gallium recycling an important endeavor.

Tantalum is another rare element, only occurring in 1 or 2 parts per million in the Earth’s crust. One of its isotopes (180m) is the rarest material in all the universe, representing about .01 percent of all tantalum in existence. In short, it’s difficult to find anywhere. It is a valuable sputtering target, though, because it offers an attractive combination of heat and electrical conductivity.

Tantalum is also among the most corrosion resistant materials known to man, and can even withstand the powerful effects of aqua regia (a combination of nitric and hydrochloric acid). With its impressive durability, tantalum is a common choice in the production of alloys intended for use in extreme conditions. For example, it is common in superalloys intended for use in rocket construction.

Niobium is atomically and chemically similar to tantalum. Niobium is usually found where tantalum is, and they are typically used in the same applications. Without sensitive analysis equipment, it’s almost impossible to tell the two apart, but they are both prized for the extra strength and durability they add to other metals when alloyed.

Although it is never used in concentrations greater than 0.1 percent in alloys, that is enough to fortify metals under high pressure and corrosive risk, such as those used in gas pipelines. Niobium is also an important metal in the production of superconductors and magnets, including magnets placed in medical imaging machines and particle accelerators.

Clearly, these are materials worth preserving and recycling, and scrap metal experts will ensure that they remain useful, even when found in trace amounts. In this way, scrapping sputtering targets is convenient for product manufacturers, a bonus for the economy and good for the environment.

GET THE BEST PRICE FOR YOUR SPUTTERING TARGETS